Last week you completed a simple task to find an idea that might be suitable for your Audio Story or Podcast. You then made a list of different things relating to that idea.

So now it’s time to start writing up your story.

Structure is like a blueprint or floorplan for a building. If you construct a building without an accurate plan, it would end up all over the place and most likely would fall apart.

The same happens with a story. It needs structure to keep it all together.

Fortunately there is a basic storytelling structure that you became familiar with even before you could read or write. And that structure kept you engrossed in the story. In fact, I guarantee that as a child you asked for that story to be read to you over and over again. Or if it was cartoon, TV show, or movie, you watched it over and over again.

And here’s the simple structure.

The 3-act structure is a model used in narrative fiction that divides a story into three parts (acts), often called the Setup, the Confrontation, and the Resolution.

Most stories follow a 3-Act structure. Certainly most movies do. This was first clearly defined by Syd Field in the mid ’70s in his book Screenplay.

It has been repeated, refined, and built upon in hundreds of books since.

But the basic idea goes back as far as Aristotle (384–322 BC), who in his Poetics defined stories as having a Beginning, Middle and End that are causally-related.

What Syd Field did was set down a paradigm that most good movies tend to use.

Though this hadn’t really been documented before, it was clear filmmakers were aware of this form and were using it – whether consciously or unconsciously.

And this is it:

This same basic 3-Act structure applies to just about any story. Fictitious or true. Long or short. Entertaining or informational.

It works for a short film, TV commercial, cartoon, magazine article and even a Podcast opinion piece.

It works for both visual and audio stories.

MIDDLE / CONFLICT:
Jack fell down
And broke his crown
And Jill came tumbling after.

Up Jack got
And home did trot
As fast as he could caper.

END / RESOLUTION:
Went to bed
To mend his head
With vinegar and brown paper.

When looking at a story, ask:

If your story or podcast doesn’t have an angle it’s in danger of ending up as a lot of waffle.

Even if it has good structure – a beginning, middle and end – if it doesn’t have an interesting angle it may not hold the listener’s attention.

Often we chose a subject that has been covered before. And the reality is, most have been!

But giving it an unusual or interesting angle can breathe new life into it.

So think about what would interest your intended audience.

Naturally you will mention their achievements, nationality, ranking, possible sponsorship and career earnings etc.  But do they have a hobby or interest that is unexpected? What if they were into bird watching? Why do they love bird watching? Do they find time to do it on tour? Have they ever spotted a rare bird? Where was that? Do they like the solitude after the noise of the stadium?

What if their love was cake baking? What is their favourite cake to bake? Is it a family recipe or their own? Have their cakes won any awards? Do they donate their cakes to the homeless? Do they eat their own cakes and if so how do they manage their weight? Etc, etc

Of course your subject may not have such an opposing hobby.

Maybe an angle could be their heritage, or their family home life? Maybe they just built a new country escape cabin that they designed? So did they dream of being an architect?

If you ask questions and dig around a bit, it’s amazing what you can find to give your story an interesting angle.

Write a mini audio story/podcast about something to do with Sydney.

Use 3 Act Structure. 3 paragraphs only.

Paragraph 2 – Middle (give us the info) the longest paragraph

Paragraph 3 – End (wrap it up) make it short

Find an angle. What can you focus on?

Iconic landmarks – The Harbour Bridge, Opera House, Sydney Tower, The Rocks (you could include all three or just pick one)

History – The Tank Stream (Fresh water supply for early English settlement) – Where was it and is it still running today?

For a Podcast you may wish to welcome listeners back and explain what you will be talking about today.

For a Feature Story introduce it by mentioning Sydney. So for a tourist or foodie audience, maybe something like this as the set up:

Many cities around the world enjoy a restaurant district that specialises in Asian cuisine. And Sydney is no exception. Situated in the southern part of the CBD, Chinatown boasts not just a variety of Chinese cuisines but also Thai, Malaysian, Korean and Japanese. 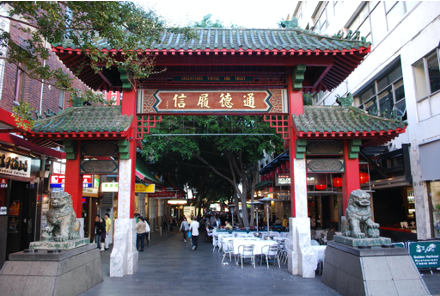 NOTE: You don’t have to write in SFX or music at this stage but just be aware that something like Chinatown makes a really good audio story or podcast because you can bring it to life by including lots of SFX: city noises, people talking/footsteps, cutlery clattering, sizzling (wok cooking) and you can lay Asian style music underneath to give it a mood and emotion.

Then write the short story and use 3 Act Structure.

Keep it clear and easy to understand.

Working towards your first assessment

You’ve researched your idea, made notes and copied & pasted a list of links, so you’re now ready to write it up.

You will place that doc inside your main folder. Refer to last week’s post for instructions.

Don’t worry about adding SFX, music, narration, a co-host, characters, or interview questions at this point. We’ll be covering those next week.

You just need to have a basic structured story/podcast.

Journalist and teacher View all posts by veritychambers

This site uses Akismet to reduce spam. Learn how your comment data is processed.